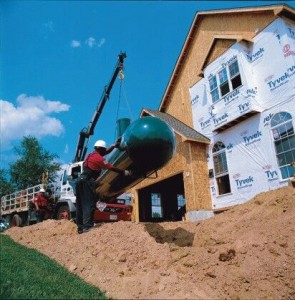 At Northwest Propane Gas, we’re proud to install underground tanks that hold propane, a low-carbon energy source made in the U.S. As a gas, propane doesn’t pool or spill anywhere, and it is eco-friendly thanks to its reduced emissions output compared to diesel, electricity, and gasoline. There are no concerns of contamination if propane were to escape from a tank, but it’s also nice to know that the gas is non-toxic and harmless to the environment.

Since 1990, the Clean Air Act has established propane as a clean form of fuel. Propane is so pure and clean that it’s actually colorless and almost odorless. To ease detection of leaks, propane manufacturers add odors to it.

Storage of propane in on-site underground tanks is perfect for homeowners in search of a reliable, eco-friendly form of energy that powers the entire home. Between above-ground and underground propane tanks, the latter is the more popular option, for several reasons:

Underground Dallas propane gas storage is affordable to install and maintain. Propane is also quickly becoming popular with eco-conscious consumers because it creates far less greenhouse gas compared to other forms of fuel.

For more information about underground propane storage, contact us, the Northwest Propane Gas Company, at 800-274-6121.